Pro1: Blueprint for a Better Head – This Dart’s in the Bull’s-eye 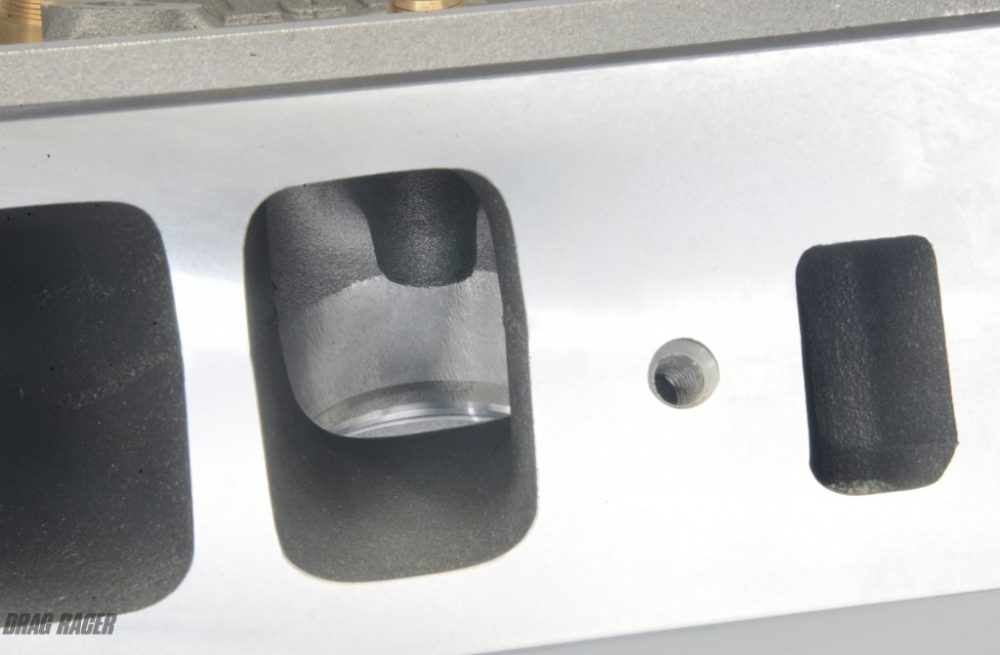 Introduced in the mid-’60s, Chevrolet’s big-block is regarded by many as the most rugged and reliable large displacement automotive V-8 engine design of all time. It also sported canted valves, which open toward the center of the cylinders, and therefore, away from the walls, promoting better air flow. A further key innovation was four-bolt main bearing caps that brought greater security to the engine’s rotating assembly, which could operate happily in the upper 6,000-rpm range.

Then in 1982 its sporting credentials were considerably enhanced when it received Dart’s new 320 and 360 cylinder heads. Later, in 1998, the Pro1 was introduced. An advanced entry-level head, it met with immediate success, outstripping the highest hopes of its creators. Today, its qualities remain versatile and competitive because it’s constantly refined as new technologies emerge. Its allure was triggered by a number of factors, all significant and collectively unique.

By maintaining the original OEM dimensions, including the 120cc combustion chambers, these heads invest every big-block Chevrolet with many useful qualities. Says Dart engineer Tony McAfee, “Whether it’s a nineteen-seventy LS6 street-running Chevelle or a contemporary full specification race car, the Pro1 will show a marked advantage.” Unlike other aftermarket 18- or 20-degree heads or a Big Chief, the Pro1 requires no additional custom parts. Though it can accommodate full-race shaft rockers it’s supplied with rocker studs and guide plates and it maintains stock locations and stock sizes.

Why decrease the valve angle when it impedes the gas flow?

Decreasing the intake valve angle, in this case from 26 to 24 degrees, is an old trick popular with race engine specialists in the ’70s. It was used chiefly to reduce the chamber size. But in so doing, the lesser valve angle slightly compromises the path of incoming gases: The line-of-sight from port entry to the combustion chamber is slightly less efficient. Creating a straight shot down the intake tract to the combustion chamber is the universal doctrine of racing head specialists and any unnecessary curving down of the port to meet the valve head is considered with some caution.

But by reconstructing the port’s short turn—its location, its height, how far it’s laid back, the narrowest dimension from its surface to the roof of the port—easily improves the Pro1’s efficiency compared with the original 26-degree specification. By Bernoulli’s Principle, air loses pressure as it gains velocity and builds pressure as it slows—low pressure at the long turn (the outside of the bend), higher pressure at the short turn.

When the intake ports are functioning at their fullest potential, focus is directed to the exhaust, and it’s here where Dart’s greatest ducting gains were probably orchestrated. Initially they raised them by 0.300 inch at their entry locations. As a result, the port’s short-turn radius was increased, ending a perennial problem with the original big-block head design. Dart also reduced its valve angle by 2 degrees, from its original 17 degrees to 15. The original 4-degree cant angle of both valves (the fore and aft angles) remains unchanged. In the process, the intake valves are extended by ¼ inch.

McAfee, an unusually lucid man says, “The whole port is a mathematical formula from the valve size to the port entrance. Also, we see the combustion chamber as an extension of the port. We consider two occurrences simultaneously: airflow and flame travel. So the shape of the chambers reflects the action in the ports.” In these dynamics lies the technical treasure of Dart’s Pro1 heads.

Devised to bring Pro Stock technology economically to sportsman racing, the Pro1 is particularly popular in drag racing categories: Super Gas, Super Comp, and bracket classes as well as in boat competition. But its versatility makes it ideal for high-performance street cars. “Its two chief benefits,” says David Reher of Reher Morrison Racing Engines, “are its adaptability and its value for money. You can race it competitively or run it on a high-performance street car. Those as-cast runners and combustion chambers perform as well as any fully CNC-machined head, and it’s inexpensive. They have been the best bang for the buck for years and even more so now.”

Judging cylinder head performance on air-flow numbers alone can be misleading, especially with large-displacement engines. “The longer I’ve been building engines, dynoing engines and racing engines,” concedes Jon Kaase, “the less I think of air flow numbers.” On a big cubic-inch motor, for example, knowing the cfm is largely irrelevant. In my experience, you could, select a number of heads all ported differently and all with the same air flow rates yet one could make 100 hp more than the others.

Like most intelligent engine developers and tuners Dart uses dry-flow bench statistics within their limitations. “If you have a small throat functioning in a large port,” McAfee notes, “it will flow impressive dry-flow numbers but it won’t perform well elsewhere.” For this and other reasons they develop their cylinder heads using three criteria: data from the wet-flow bench, the dynamometer and the race track.

When you ask Dart’s technical sales chief, Mike Sanders, about the significance of the Pro1’s intake port dimensions, he’ll tell you of the importance race engine builders place on them. “Their height and width is 2.430 inches by 1.700 inches, and most professional engine builders ensure the ports of their intake manifolds are smaller than those of the heads—usually reduced by around ten percent.” This means a step or a lip is formed between the two components, the cylinder head and the intake manifold. “The engine has a natural pulse,” explains Sanders, “and as the valves are opening and closing and the air is moving back and forth in the induction tracts, they use the undersized port as a reversion dam.” Thus by making the ports of the intake smaller than those of the cylinder head, the engine builder attempts to impede the reversion pulses.

Pro1 heads are supplied with intake valves of either 2.250 or 2.300 inches and an exhaust of 1.880 inches, the standard GM performance size. Invariably, the size of the intake and the exhaust valves dictate the amount of air the head moves at a specific rpm. However, the valve sizes are dictated by the valve guide locations and the size of the cylinder bore in which they operate. But in the design of the Pro1 head, it’s the practical side of the argument that was the most persuasive. “When a guy needs a valve,” contends McAfee, “he’d prefer having access to a standard valve than the inconvenience of a custom one that might take six weeks to get.”

For the more ambitious racers, the big news now emerging from Dart is word of its new Pro1 20-degree head; more information about the heads will follow as it’s released.

Probably the most thought-provoking elements inside Dart’s Pro1 ports are the short turns. Collectively, their location, height, their laid-back profile, the narrowest dimension from their surface to the roof of the port has achieved much of the Pro1’s efficiencies.

A chamber or a deck that is too thick retains heat, which attracts detonation and complicates tuning. One that is too thin is intrinsically weak. To promote uniform internal sections that allow coolant to be directed to all necessary areas, Dart’s Pro1 head employs premium materials. Heat is dissipated evenly and steam pockets and hot spots are avoided.

Dart’s Pro1 heads are available with five different runner volumes. Employed to operate with a wide variety of engine displacements, rpm ranges and gearing they provide the ability to deliver peak power at 7,500 rpm or cruise at 2,700 rpm.

It is good practice to match the combustion chamber to the cylinder bore. Always avoid an overlapping chamber because the gasket might be exposed to burning due to combustion on the gasket surface.