CARBURETOR CLASS: The Hows and Whys of Secondaries 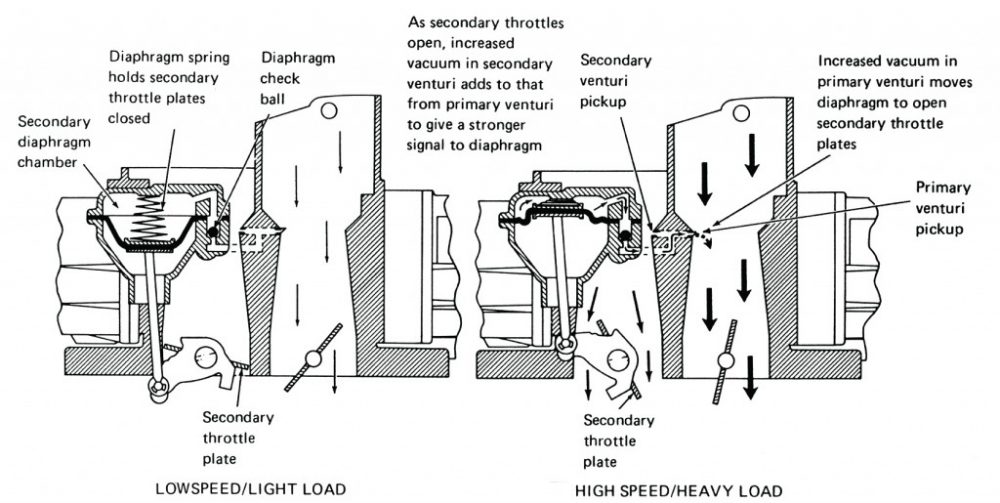 Today we’re talking secondaries. Why we have them, how they operate, and how to choose the right style for your ride. Most fuel injection systems use one giant butterfly valve to gate incoming intake charge, so why don’t carburetors?

A carburetor draws fuel into the engine based on engine vacuum, and the only way the operator can adjust that is with the throttle plates. Small engines can make do with one or two small plates, but when we’re feeding extreme amounts of air and fuel into larger engines, we need to be able to regulate the fuel’s introduction to the fire pit in a more controlled manner. We do this with primary and secondary throttle plates. Depending on the engine’s purpose and fuel requirements, the secondary plates will open at different times, triggered by different means.

Mechanical secondary carburetors are recommended for racing cars. They react to quick bursts of fuel without bogging. For all-out performance they are a better choice as they react directly to throttle position, no matter what your engine thinks it’s ready for. That being said, a properly tuned vacuum secondary on a street car can match the mechanical secondary’s performance.

Vacuum secondary carburetors work best on mid to heavyweight street cars with automatic transmissions. The secondaries open more slowly with a lesser “hit,” which is easier on an automatic transmission and feels smoother to the driver. They are more forgiving than a double pumper because they work by sensing engine load. The secondaries open based on a vacuum signal from the primary side that works against a spring. When the spring resistance is overcome by this vacuum, the diaphragm pulls the secondary throttle plate open. The fuel comes from the main jets or metering plate at this time.

The opening rate on a vacuum secondary carburetor is manipulated by different weight springs. Holley’s Street Avenger line comes with a light, medium and heavy spring, while other lines come with a spring chosen to work best on most applications. Holley has a quick-change diaphragm setup (P/N 20-59) allowing you to change the spring with two Phillips head screws on non-Street Avenger models. The spring kit (P/N 20-113) is a set of seven springs ranging from light to heavy, allowing you to fine-tune your opening rate. When the secondaries open too early, you will experience a hesitation, as there may not be adequate signal to pull enough fuel without a secondary accelerator pump to cover this transition. When they are opened too late you won’t run into any drivability issues other than just being lower on performance and a little sluggish.

All street cars should be working on secondaries that open progressively. This means that the primary throttle plate opens first, followed by the secondary throttle plate. Mechanical secondary carburetors have two secondary link hookup positions on the throttle lever. The upper is for the factory progressive link, and the lower is for a 1:1 link (P/N 20-122). This link is infinitely adjustable at both throttle lever locations. The 1:1 link makes the primary and secondary throttle plates open simultaneously, and is used in drag racing applications where demand is for the most air and fuel possible. This link should not be used if there is any chance the car will be driven on the street. Holley’s new Ultra HP models have an adjustable, allowing you to switch between progressive and 1:1 adjustments without changing pieces.

Armed with this information, you should be able to choose which type of carburetor is right for your car. This is an important decision as it has a huge impact on how your car acts, and it’s something that can’t be changed later. If you’re still not sure, feel free to visit Holley.com and use the Carb Selector tool at the top left corner of the home page. Holley’s tech guys are also happy to answer your questions via phone or email.